A dense molecular gas has been rapidly magnetized using light. Done by physicists in Canada, the experiment involves using an «optical centrifuge» to rotate the molecules. This causes the electronic spins of the molecules to line up in the same direction. The technique could have a wide range of applications including the production of large amounts of spin-polarized electrons. 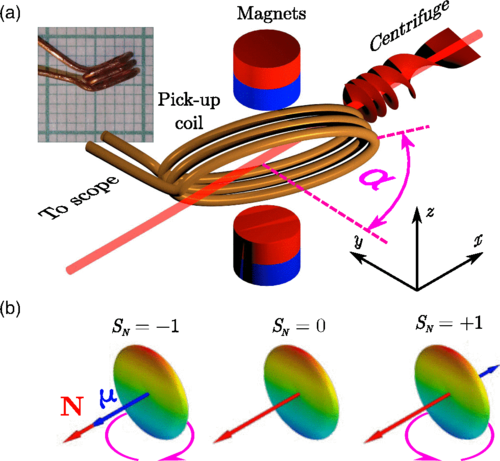 Creating a magnetized gas in which electronic spins point along the same direction is very difficult to do by simply applying a magnetic field – even using the strongest laboratory magnets. Magnetization can be achieved by shining circularly polarized light on a gas. If the light is resonant with the molecule’s electron energy levels, a high degree of spin polarization can be achieved in about 100 ns. However, this only works if a high-intensity source of light at the correct resonant frequency is available. Another problem is that the technique is only practical for relatively diffuse gas samples.

Now, Alexander Milner, Alexsey Korobenko and Valery Milner at the University of British Columbia have used a non-resonant optical technique to magnetize a sample of oxygen gas. Called an optical centrifuge, the method involves firing broadband laser pulses into an optical system that outputs corkscrew-like pulses. These pulses are then able to deliver large amounts of angular momentum to molecules. A process called spin-rotational coupling then causes some electron spins on the molecules to become polarized and point in the same direction, thereby magnetizing the gas.

Although only a few percent of the oxygen molecules are actually centrifuged in the process, the number of polarized electrons created is about 1000 times greater than achieved using resonant techniques. The magnetic field created in the sample is on the order of tens of milligauss – which is about one tenth of the Earth’s magnetic field.

Other benefits of the technique are that it works in less than one nanosecond, and that it can be deployed at room temperature in relatively dense gases. The team also found that the process can be enhanced by placing the gas in a magnetic field.

According to the researchers, the optical-centrifuge technique could be useful for nuclear magnetic resonance (NMR) imaging because the electron-spin polarization can be converted to a nuclear-spin polarization for NMR. A spin-polarized gas could be used as a source of spin-polarized electrons for particle-physics experiments as well as for probing the dynamics of chemical reactions and analysing the electronic properties of materials.